So – this Sunday we’ll be coming to our last study in the Gospel of Mark – we’ll be reading chapter 16. For the last year in doing this study I’ve done digital paintings to accompany the teachings – and I thought I’d share my process with you for these. This is sped up by 650% – so don’t get any ideas that I can actually paint this fast. It was fun to do – but I don’t think I’ll bite off anything that ambitious again – it really commandeered my time.

Most scholars, including very conservative ones, don’t believe the last 12 verses of ch 16 were part of the original text, but were added sometime after the 3rd Century. With that in mind, we’ll be keeping our focus of this study on the first 8 verses…which makes for a really open-ended finale.

In the text we return to the women we were reading about at the end of chapter 15. They are going to the tomb to finish the job of preparing Jesus’ corpse, something left undone because they ran out of time before the Sabbath. How does the theme of unfinished work get revealed in the first 8 verses?

Why do you think it was important that the angel singled out Peter as one to whom this message was given? What can that tell us about our own times of falling short? What significance can you discern in the fact that Jesus had gone before them and would meet them when they got there?

If you were to narrow the text down to the first 8 verses, what do you feel at the end of v8? Is there anything you feel prompted to do when concluding with v8? Ad infinitum is Latin for “to infinity”, connoting that something is ongoing. Mark probably intended for his readers to be called to an ongoing action in the wake of Jesus’ resurrection.  What is your response to the news that Jesus his risen, and what does it call you to do?

This has been a really enjoyable study to undertake! Hope you got as much out of it as I did, and I certainly hope you return to Mark again and again to read the Good News about Jesus the Messiah, the Son of God!

Jim Gaffigan has a stand-up routine from years ago where he declares: “I’m a vegetarian…it’s just that I eat beef and pork and chicken…but not fish because that’s disgusting”. It’s humorous because it cuts across the very definition of vegetarianism. The character he presents clearly doesn’t understand what it means to be a vegetarian.

It strikes me sometimes that a lot of Christians are like that when it comes to the Gospel – the Good News. A lot of times if I ask the question: “What is the Gospel?”, I get a variation on the idea that Jesus died to save us from our sins so that we can go to heaven and not hell when we die. It’s not that I disagree with any of that – but I’m not sure that really captures the heart of what the Good News really is because the focus is placed on what happens after this life.

This Sunday we’ll be reading Mark 1:14-20 as we continue going through that account of Jesus.

In v14, we abruptly find out that John the Baptist has been arrested and Jesus has started publicly announcing God’s Good News. We’ve noted before that the word euangelion,  εὐαγγέλια, was not unique to Christianity. It was a word used to announce good news from Caesar, or announce his birthday, or declare a victory in battle.

What does Jesus say that sets the Good News that He preaches apart from the good news of Caesar? Who is the center and focus of this Good News?

In v 15, Jesus explains what the Good News is and what our response should be. Notice the words he’s saying: The time has COME, The Kingdom of God is NEAR, REPENT and BELIEVE. Follow the links on those words and consider what they mean.

Using the definition of the Greek words, write what Jesus is saying in your own words.

Read Daniel 2, especially v 44  – What do you think the people of Galilee were hearing when they heard the Good News proclaimed by Jesus?

When Jesus calls his first disciples in v16-20, they respond immediately.

What does their response tell us about what hearing the Good News demands of us?

What would it look like in our own lives to follow this example of Peter, Andrew, James and John? How would you describe the priorities their response symbolizes?

There have been lingering questions about why these guys would have responded so quickly and decisively. I had a whole section in my teaching that I had to remove because it would have made it run too long…but I copied it and I’ll paste it here, in case you’re interested. It helps round out the oppressive economic picture of that time and place, which helps us see why these guys may have responded like they did. I’d be interested in your thoughts on this. Anyway, here it is:

“Now, people have gotten cynical about this section, wondering about the abruptness of it – ‘what would make these guys respond so quickly to a rabbi like this?’ But, there ARE historical factors here… we need to understand the situation these guys were in.

We tend to think of these fishermen from the standpoint of a free-market, capitalist society, like WE live in. We imagine a nice little family business where they catch fish for themselves and sell the surplus to the local market. We view them as middle-class, blue collar Joes.

But we’re wrong. There was no free-market capitalism in the world run by the Roman Empire. Rome ruled the known world – and sure, they brought roads and aqueducts and peace to the region…but they also brought the demands of the Roman elite from Caesar at the top to his agents and governors like Herod Antipas, the ruler over the Galilee region, and all the layers of bureaucracy in between. The sea of Galilee was no longer localized as a source dietary staples for the people who lived there – the sea of Galilee belonged to Caesar – nobody was going to fish there unless he approved it. Fishing leases were required, and taxes and tolls for ports were exorbitant.

Everyone was taking a cut of both the fish AND any potential profit to be made from them.

So local fishermen found themselves in an economic free-fall – they were at the bottom of this elaborate financial hierarchy. They had a trade that had been handed down through generations but now were tantamount to slave-labor …they had no hope of escape from this economic oppression.

Along comes a Rabbi who declares the time has come for God’s kingdom to break in on things. And they’re thinking…well, what would they be thinking, what might they have imagined?

‘This is IT, finally we’ll be free from our oppression and there will be justice.’

They were right, but not the way the expected.”

I remember once when my wife and I were going to turn an enclosed porch area on the back of our house into an extra bedroom for our boys. We planned and considered how this could be accomplished and what it would take. We drew a lot of diagrams on napkins and contemplated this task – and then realized it was too big for us and had to be hired out. A friend from church did construction jobs like this agreed to take on our project. What I still remember was the great sense of satisfaction and even surprise when he set out to tear sections out and rebuild others, because there was a big difference between this project in theory and seeing it in action. It turned out much better than we had imagined.

That’s a lot like what’s happening in our study in Matthew. We’ll be reading the last part of Matthew chapter 4 this Sunday and we’ll finally see the start of Jesus’ ministry.

In v15-16, Matthew identifies Jesus’ work as a fulfillment of a prophecy given by Isaiah, 600 years earlier. Light dawning on people living in darkness is how the action of the kingdom of God is described. What is your impression of this metaphor? What do you think it means, and how does that inform your understanding of God’s purposes for humanity?

We then read about Jesus’ first disciples. We’ll be unpacking the dynamic of rabbis and talmidim (disciples) on Sunday morning – but succinctly put: if these guys were working in the family business, it was because they didn’t measure up for normal rabbinical activities. Yet Jesus chooses these fishermen to be his close associates who will set out to imitate him. What does that tell us about God’s rule in action? Who is it open to, and what action does he call his disciples to (v19)?

V23-25 provide a summary of the excitement that was building around Jesus. What is it that he is becoming famous and sought out for? What is this revealing about God’s rule in action – what is intended? In all three of these examples, what is it about this that makes it good news?

Looking forward to this study! Happy Father’s day in advance – and don’t forget it’s Surf-N-Grill this Sunday, and if you want to be baptized, follow this link to sign up online: sign up! 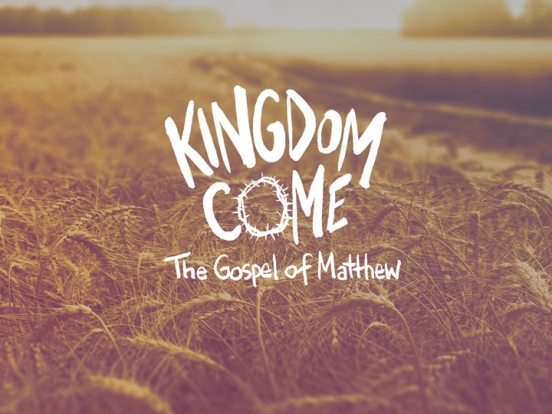 This Sunday we’ll be starting a new study in the gospel of Matthew! We’ll be reading all of chapter one. I’m pretty stoked about this as it’s my second time through this gospel. I know it can be a disappointing shock when you begin to read this story and realize it begins with a long genealogy. Not the exciting start we’d hoped for, but an important one for establishing Jesus’ claim as Messiah. The expected Messiah was most certainly supposed to be Jewish, and from the family line of King David. The list of names that Matthew provides establishes just that.

Now, pay attention to the names of the characters in this list. Look up Tamar and Judah. Do some research on Rahab and her occupation; Ruth and her origins. What event launched David and the mother of Solomon in thier relationship? Explore the lives of all those descendants of Solomon and look at the epitaph that they left behind, including Solomon himself. Does this look like a squeaky clean list of characters? Do you spy, with your little eye, any skeletons in Messiah’s closet? What does that tell us about God’s kingdom and who it chooses to work through? How can that combat any shameful past we may have?

V 21 and v23 give us names that declare mission and the nature of the mission of Messiah. What do those names mean to you personally?

Hey – the Bible Project has done a set of WONDERFUL introduction videos that lay out and explain the structure and emphasis of Matthew’s gospel. Please take the time to look at them in preparation for this study! Hope to see you Sunday!