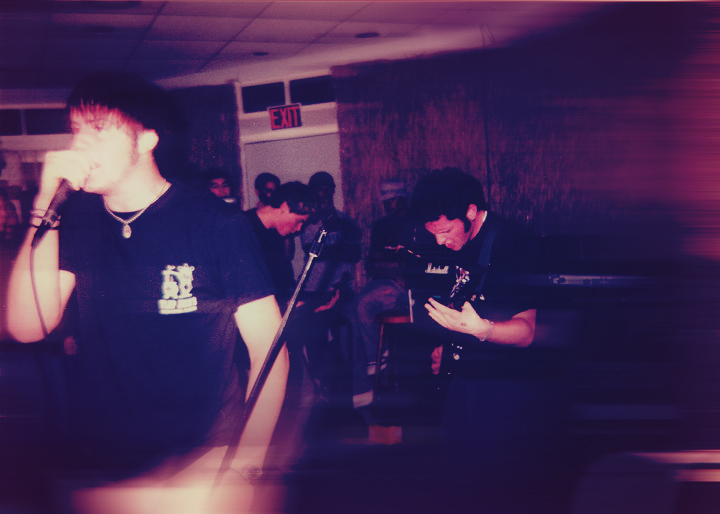 Way back when we used to run the Javalooyah Coffee House (don’t mock me…it was the 90’s), we used to provide a venue for the burgeoning punk and hardcore bands, most of whom were Christians. It was pretty common that when when a band would play, midway through their set one of the band members would take the mic and offer a few words about his or her faith. It was always pretty awkward and uncomfortable for everyone involved – but I was always moved and proud of these kids for being brave enough to do that. One night a lanky bass player with Eminem hair color (not from the band pictured above) got up to the mic and started his plea with “If you’ll just come to Jesus and give your life to him, he’ll make all your problems just go away.”

I looked at my coffee mug and wondered if I could throw it with enough accuracy to knock him out and get him away from that microphone. I didn’t though. Obviously I knew he was sincere and was only trying to make his plea for the cause of Christ, but he was representing a fundamentally flawed theology in the process.

I don’t know if it was the whole Charismatic/Word of Faith movement that started this notion, or if its just an extension of basic human desiderata, but too often people operate under the notion that God’s plan for our lives is to eliminate all suffering for us.

Eugene Peterson, in his book Five Smooth Stones for Pastoral Work wrote: “The biblical revelation neither explains nor eliminates suffering. It shows, rather, God entering into the life of suffering humanity, accepting and sharing the suffering. Scripture is not a program from God providing, step by step, for the gradual elimination of suffering in a series of five-year plans. The suffering is THERE, and where the sufferer is, God is.”

This Sunday we’ll be reading John 16:16-33 where Jesus explains that suffering will be part of our experience – but that through him, we can have a coping and stable life in the midst of it.

In v16-22 Jesus uses the image of a mother and childbirth to illustrate one way in which we can remain stable in suffering (which is awesome, since we’ll be reading this on Mothers Day). His point has to do with end results. How can a consideration of the end of the story be a help in stabilizing us during present troubles? Here’s something to ponder: What was the source of the woman’s sorrow in Jesus’ illustration, and what was the source of her joy? Does that tell us anything about the nature and purpose of the hardships we are sometimes faced with?

V23-27 records Jesus for the third time encouraging us to ask for anything in his name. We pointed out that “in his name” isn’t a cosmic credit line but meaning asking according to his plan and purpose. Either way…the invitation to directly communicate is clearly emphasized. How can that play a role in stabilizing our lives during times of trouble?

He concludes this section in v28-33, uttering those famous words “In this world you’ll have tribulation, but take heart; I have overcome the world”. How can knowing that Jesus has run this course and conquered it enable us to stand strong?

Clearly we need to let go of the concept that suffering is somehow an indicator that something is wrong or that God is mad or doesn’t care. Suffering is part of the scene. Lets consider some ways in which we can apply Jesus’ encouragement to our own difficult circumstances – and let’s allow him to shape us in the process!  The songs for this Sunday are posted at Facebook and the Hymnal.  Hope to see you Sunday!

2 thoughts on “A Stable Life in a Wobbly World”