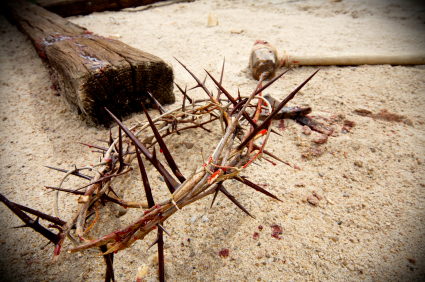 I love it when I’m able to finish a project. Last winter I worked on a comic book for Voice of the Martyrs. It had a tight deadline and required a lot of long days that ended late at night. When the final page was drawn and colored – the sense of relief, release and satisfaction was immense. There is something wonderful about bringing a mission to it’s proper close. Yet I find it so hard to relate those feelings to what I read about when Jesus brings his project to a close.

This Sunday we’ll be reading John 19:1-30 – it’s the account of Jesus’ crucifixion. It’s not pretty. It’s painful and hurtful and tugs at the heart. There is nothing about it on the surface that indicates victory or success, and yet, at the end of this section Jesus announces “it is finished”.

The question we’ll be asking is: WHAT was finished? Jesus doesn’t say, and neither does John, at least on the surface.

I know that the entire New Testament is fairly dedicated to answering that question, so it’s not as though we are left in the dark. But as far as THIS passage goes, I believe the seeds for the New Testament garden are planted in John’s account.

I’ll give you a hint, and let you parse it out yourself. John identifies the kind of branch they use to offer Jesus sour wine – it’s hyssop. What is significant about that, and how would John use that to interpret what is happening to Jesus?

Jesus tells John (the disciple whom Jesus loved) to look after his mother – to take her in as his own mother – changing the dynamic of their relationship there at the foot of the cross. What could that tell us about what Jesus accomplished on the cross?

Pilate put an inscription above Jesus’ cross which read “Jesus of Nazareth, the King of the Jews” – it was written in the three dominant languages of the known world. Pilate meant it as an insult, but what if God conscripted his mockery to make an announcement? How would this multinational/multicultural declaration help us interpret what Jesus finished on the cross?

It’s a long passage again….so again, I’ll try not to make it a boring read.

Hope to see you there!