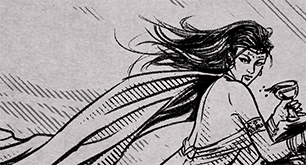 Most of us are familiar with the archetypal trope of the femme fatale. The term is French for fatal woman. She is usually presented as a temptress, driven, manipulative and shrewd. She is often very dangerous to the men she tangles with, usually being cast as a villain in the story. From the Bible to Arthurian tales, to Shakespeare, to modern film-noir we encounter this archetype. Certainly there are stories with men who fit the pattern as well; the homme fatale. A handsome, mysteriously seductive, yet dangerous man. I suppose the female version is more prominent because it overturns and threatens the formerly normalized power dynamics, making for a more intriguing story. That’s my theory anyway.

As we continue our study of Revelation we’ll be reading chapter 17 and we will encounter an archetypal femme fatale: the harlot described as Babylon. Revelation is all written in symbolic language, remember, so what is really being described has nothing to do with women or prostitution, but rather, fidelity to God.

The woman is described as sitting on the Beast we encountered earlier, in chapter 13. When you read over her description, what might the various details about the scarlet clothes, the jewelry and what it is that she is drunk on be symbolizing? If we remember the last time this sort of imagery was employed, in chapter 2, when the church in Thyatira was rebuked for committing adultery with Jezebel, it was most likely addressing a compromise of convictions in the church. What might this woman in chapter 17 be representing?

When the Beast is described, attention is paid to his heads and horns, with cryptic significance assigned to them. We’ll cover the various theories about what they might be representing on Sunday.

If this imagery is describing the systems of power and popular ethos in our world, what warning might we take away from it? What encouragement could it give?

The chapter is filled with vivid and disturbing images – hopefully we’ll be able to get a handle on the message it conveys. See you Sunday!