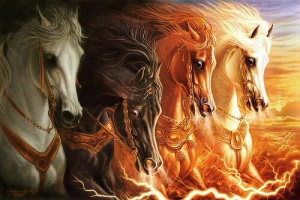 Forgive the Tolkien reference in the title…sometimes I just can’t help but let my inner geek run amok.  This Sunday we’ll be looking at Mark 13:14-37, and we’ll finish up the chapter.

Remember our introductory remarks about the first thirteen verses…while end time events and prophecy is cool and all, to over emphasize it can be almost as dangerous as ignoring it.  So, while keeping our heads cool and level, we’ll be looking at some of the characteristics that Jesus describes will surround (what I believe to be ) the end of the age.

Jesus begins this section pointing to a prophecy from Daniel 11which references “the abomination of desolation”.  It might be interesting reading to look at this entry from the Jewish Encyclopedia (it’s about a Syrian King named Antiochus).  From the Jewish perspective today, and back in Jesus’ time, this was a historic event, not something yet to be fulfilled.  What does that tell us about Jesus’ statement here?

In v19, what will the world be like in the time period he’s describing?  What does that tell us about the direction the world is taking…and how does it effect our expectations about the state of the world?

As you read this section over, who or what seems to have the upper hand through it all?  Yet what is the final outcome that Jesus predicts?  It might be helpful to read Daniel 7…or at least v13-14 in that chapter.

Verses 28-31, of Mark 13, tell us that we can expect an intensifying of troubles, leading up to the grand finale…just like we see buds and leaves sprouting and leading into summer and harvest.  In v31, Jesus makes a prediction about his predictions…what is it that he says?  What does that tell us about his predictions?

The final section, v 32-37 sort of put the final qualifier on the issue.  What does He say about these events?  What do we need to factor in because of this qualifier?

That should give us plenty to mull over and chew on this week!  See ya’ Sundee’!