I watched an elderly gentleman walk past the room where I was working. His slender frame glided past the door in a sort of graceful shuffle, and our eyes met. I smiled and nodded but his expression never changed as he shifted his focus from me to the path in front of him, as though the next few steps were effort enough without having to entertain strangers along the way. I watched him go by, wearing the burden of his life like a sack of stones across his shoulders.

It’s been two years since I was last in Tonj. Things have gotten exponentially better in terms of living conditions for the mission and clinic. But life is still very hard in South Sudan, and almost everything that gets accomplished is done so with a great deal of difficulty and strain. That’s why it’s great to have people on your team who have practical skills. Matt, Garrett and Blake have been working machinery to make huge piles of bricks for the new clinic. I watch them come in from the field covered in cement dust, bone tired but laughing. Robbie has been busy helping Suzy organize supplies and helping in the pharmacy. Of course, our three medical personnel, Dave, Marqueta and Lauren hit the ground running, treating the never ending stream of suffering that comes to this place.

I’m a pastor, which makes my skill set very narrow and of debatable practicality. But under the thin veneer of “pastor”, you actually find a cartoonist, and you realize that it’s worse than you thought. One of the things we had thought about doing was painting some murals to brighten some of the walls up. Sabet took me to what he called the observation room, where patients could stay on cots and the doctors could monitor them. “It would be nice to have something colorful here.” 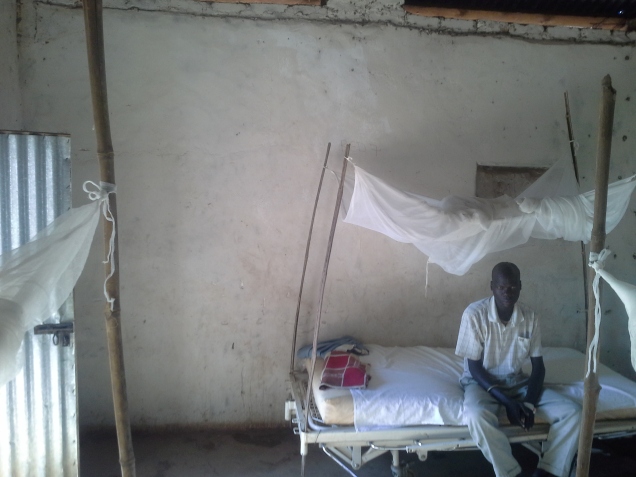 Looking around the room I saw men and women and children, all lying down in quiet misery. That’s not to say it was quiet, there were plenty of babies crying, but the tone of the room carried a sense of people subdued by suffering. Ayak is in that room. Her arm had been amputated because of cancer – but not before it had metastasized to her lungs. Her suffering is beyond my ability or emotional resource to describe right now. I lay in bed that night wondering what I could paint in that room, and wondering more what difference it could possibly make. Just as I was starting to drift off to sleep, Psalm 30:5 came to mind, ” weeping may endure for a night, but joy comes in the morning.”

The next two days I spent in the observation room, painting a mural meant to capture the essence of that verse. Wrestling with chalky, flat paints of suspicious durability, I painted away. In 80 plus degrees and surrounded by feted smells and moans, I painted what I believe is truth. While I worked I listened to Sam and Judah, local pastors as they shared the gospel with the patients. “Jesus will forgive you, but it is VITAL that you forgive the man who speared you.” It’s just not something you hear everyday.

When the mural was done I was deeply dissatisfied with the artwork. It didn’t look like what I had in my head…but my artwork rarely does. Still, it did what it was intended to do. Andrew is a worker for In Deed and Truth’s radio transponder…he was my helper and translator the day I finished the wall. He came in and looked at it and exclaimed “It’s wonderful!” The patients in the room asked what the painting meant, and he explained, “At night, when you are hurting and it is SO hard, you cry and feel all alone, but when the sun rises, you see people coming in to minister to you and show you the love of Christ, and you feel joy because you remember that God loves you.” And then he told me, “They will tell the next patients who come in what this means.”

And I guess that’s is how it works. The message of the Kingdom goes out, and God shares his love even through paint. 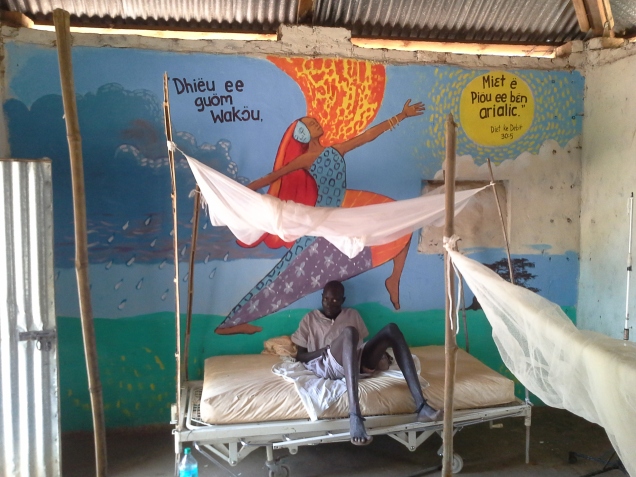 10 thoughts on “A Sermon in Paint”