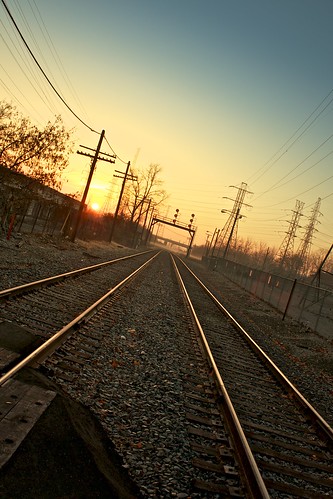 There’s a phrase we say sometimes, though it may be slipping into antiquity: “He/she is from the wrong side of the tracks”. It was a phrase used to describe a person who came from an undesirable part of town, back when railroad tracks often divided towns between the upper, middle class residential areas and the lower income, industrial sections. A person from the wrong side of the tracks was looked down upon because of economic, cultural or ethnic status. Often all three of those went together.

We’ll be returning to our study in the book of Acts this Sunday after an awesome Easter service. We’ll be continuing the story of Peter and Cornelius in Acts 10:24-48.

Clearly, God’s love is loose in the world, smashing through boundaries both ethnic and religious. Peter makes the profound statement “God is no respecter of persons”. This is a message that has been presented all the way through the Old Testament to the New – God doesn’t judge by outward appearance like we do, he discerns the heart. If we are called to emulate God, how well do we do this? Are there people you’d rather avoid, people who are defined in your thinking as “them”? How easy is it for you to depersonalize someone if they hold a different set of values than you or have a worldview you are unfamiliar with? What steps can we take to recapture this revelation of Acts 10:34?

As you read through v36-43, how would you summarize Peter’s presentation of the gospel? What words does he use that would lead you to believe that this news is good? How much does Peter say to Cornelius about hell, or heaven for that matter? What do you discern as the emphasis of Peter’s description of the good news about Jesus? What can we learn from this section about how we represent the gospel in the world in which we’ve been placed?

In v44-48 an amazing outpouring of the Holy Spirit occurs, hearkening back to the events of chapter 2. When Peter sees that the same Holy Spirit has been given to this Roman soldier and his family, he calls for  immediate baptism, accepting them into the community of God. What does his lack of other requirements say to us about who we should welcome into the family of God? This immediacy is a repetition of the Eunuch’s baptism in chapter 8. Does this repetition say anything to you?

Hope to see you this Sunday!

2 thoughts on “No Wrong Side of the Tracks”